When running the program for the first time, the OS will complain that this program is from an unidentified developer. Just right click on the application, select “Open”, then choose “Open” in the pop-up window. You only need to do this for the first time.

BPPV Viewer, a Downloadable Tool for Study of Otolith Disease

This model created by Michael Teixido MD will allow clear analysis of many different problems encountered by clinicians interested in BPPV. It is intended for investigators, clinicians and students to improve visualization and communication.

Based on human membranous labyrinthine anatomy obtained from histologic sections, the BPPV Viewer can be used for analysis in 2D mode. The creation of the 3D BPPV model in a 3D environment ensures the configuration accuracy of the model.  Histologic segmentations were initially loaded into Amira 5.2.2 and the segmented surfaces were colored and smoothed using Unity software. Unity allows export of limited customizable working environments for iOS and Windows. This functionality was utilized to create the viewer.

This model will allow clear analysis of many different problems encountered by clinicians interested in BPPV. It can be used for consideration of simultaneous phenomenon in multiple canals and on both sides in addition to unilateral phenomenon alone. Crista planes are visible in the model and may be helpful in understanding cupulolithiasis and light cupula.

A clear model allows distinctions to be made between predicted phenomena and observed clinical phenomena. The model is based on a single membranous labyrinth from a term infant that was segmented from histologic sections, cloned, and positioned based on known anatomic norms relative to an adult skull segmented from MRI data.

The assumption the model makes, that all otoliths assume the most dependent position in any head position or in response to movement, may be wrong.  Engineering based mathematical modeling of BPPV, or clinical experience may contradict model predictions.  In these cases, there will be an opportunity for greater insight. 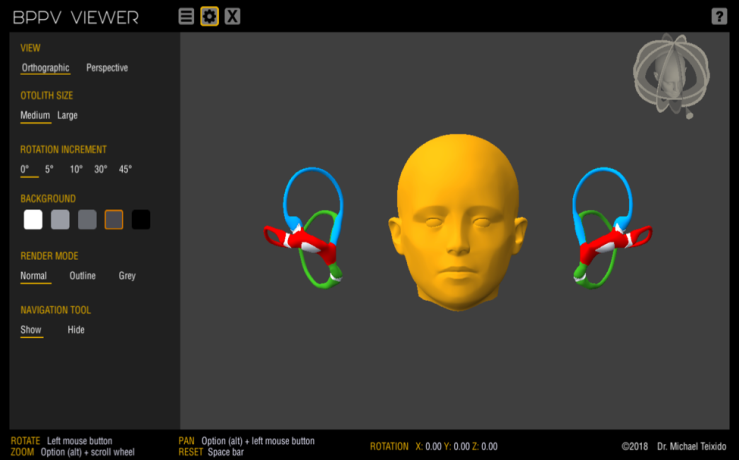 Spherical otolith markers are present created as an overlapping string of pearls at set points in the model. Fourteen otolith positions were created for each of the semicircular ducts, four in the common crus, and six in the utricle. These markers are programmed to remain invisible until the cursor rolls over their domain. A marker is present in the center position of each crista and the utricular macula; these are referred to in the taxonomy as the 0-postion markers. If clicked, the otolith position markers will remain visible until clicked again. In this way otoliths can be turned on and off without referring to the taxonomy of parts. A large or small otolith marker size can be specified. 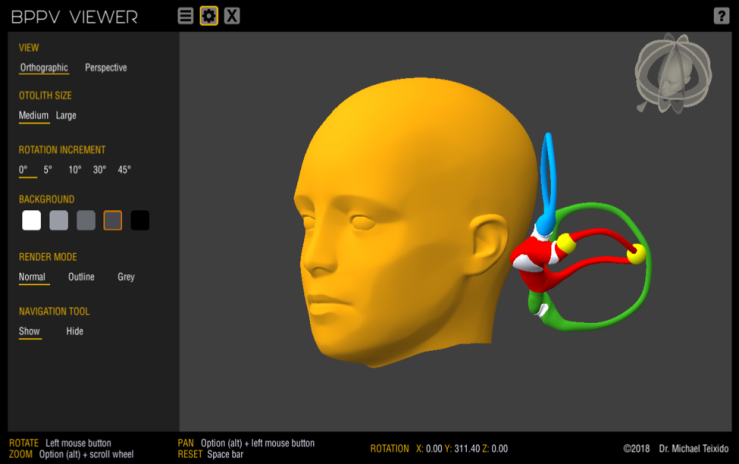 While the model can be manipulated freehand, the navigation tool allows rotation of the head at specific angular increments around the x, y or z axes, and around the RALP and LARP planes. The tool can be operated with a mouse or on the trackpad. The mouse scroll wheel offers extra functionality and fine control. This tool facilitates the finding of head positions commonly used in diagnosis and treatment of BPPV.  The x,y and z axis deviations are listed at the bottom of the screen. To use the navigation tool leave the plane of interest highlighted and scroll. Click the head in the tool to re-set to the starting position.

Crista planes were approximated by first setting a line along the curved crest of each crista. Because the crista is curved from end to end, any three points along the crestline of the saddle will describe a plane which can be carried to the opposite ampulla roof. This is a subjective process, but valuable as there is little information on the planes of the cristae. Turn the crista planes on or off in the parts menu. 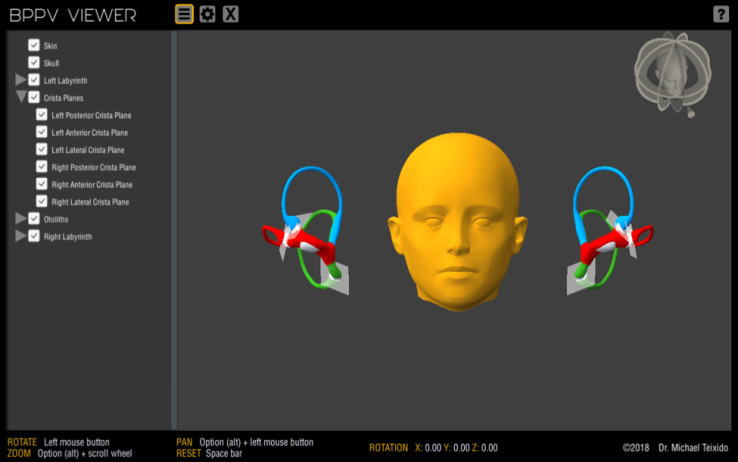 The background color of the model can be changed.  The model view can be changed from orthographic to perspective as needed for clarity. The model can be viewed in color, in black and white, or in line drawing mode. The latter modes are present to facilitate the creation of illustrations for publication or other discussion. The navigation tool can be hidden to remove unnecessary information from screenshots.

Although the model was created with high definition data sets, reduction of surface map detail of the skull was necessary to reduce the model to a workable size for download (27MB PC, 98MB Mac). After development the BPPV Viewer network was exported as a freestanding network for use in Mac and PC environments.